The reason for discharge wear

In the dredging construction, the medium transported by suction and discharge pipe is mainly seawater silt and gravel. These media in the pressure push, high-speed flow in the pipe, and the pipe wall friction, resulting in wear. Under the action of gravity, the coarser and heavier medium sinks down, forming more friction at the bottom of the pipe, so the bottom of the suction and discharge pipe tends to wear faster. The wear type of inner wall caused by medium flow is mainly abrasive wear, corrosion wear and impact wear at the elbow.

After the wear type of suction and discharge pipe is determined, the anti-wear material can be selected according to the wear type.

High chromium alloy belongs to the white cast iron series, with high hardness, high alloy composition, and high hardness of hard phase, so it has strong wear resistance. A wear-resistant composite steel tube is made of high chromium alloy and has a wide range of applications in the field of wear resistance. During the construction of the dredger, the abrasion of the inner wall of the suction and discharge pipe cannot be avoided. The suction and discharge straight pipe on the ship is generally Q235 or manganese steel, Q235 although cheap but poor wear resistance, short service life, dredging after 5 million ~ 8 million m^3 (normal construction about 1 year) will have to replace the discharge pipe. The main disadvantages of replacing the discharge pipe are as follows: first, production operation must be stopped to reduce production efficiency; Second, the replacement of the discharge pipe in the cabin is limited by the space of the site, so it is not suitable to replace it frequently. Once the pipe bursts or leakage will endanger the mechanical and electrical equipment in the cabin. The third is the need for spare pipe, both to increase manual maintenance and take up limited space on the ship.

To play to dredge the maximum economic benefit, in order to further ensure ship reliability, security, will hold the straight pipe use wear-resisting pipe (weldable, use more than 5 years) and hold a better match, elbow, the tee is greatly improved the service life, increase efficiency, and can avoid replacing pipe due to limited space and endanger other equipment. 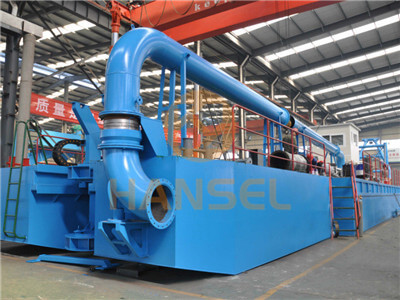