There are two main excavation directions for dredgers: downstream construction and countercurrent construction. The main factors to be considered in the direction of excavation are: (1) reduce or avoid the completion of the siltation of the river; (2) ensure the convenience and safety of construction. Practice has proved that when the river flow velocity is less than 0.5 rids, the cutter suction dredger should be constructed along the river, and vice versa. Urban rivers are generally inland rivers. In order to reduce or avoid the siltation of the completed river, dredgers usually use downstream construction because of the small flow (less than 0.5 rids) during the construction period.

Cutter suction dredger’s layered and sectioned excavation method is mainly based on the thickness of the mud layer, the width of the excavation trench, and the mechanical capacity of the construction vessels. When the designed trench width is larger than the economical excavation width of the dredger, the excavation shall be divided into strips. At the same time, in order to avoid the formation of undercut soil, there should be no less than 5m overlap between the strips. When the cutter suction dredger is excavated, In order to maintain a relatively stable discharge distance, it is advisable to start the operation from the side far away from the discharge area.

When the dredging area mud layer thickness is thick, the cutter suction dredger layer construction according to the following provisions: the layer dredger thickness should be based on the soil quality and the performance of the cutter of dredger, generally take the cutter diameter of o. 5 ~ 2. 5 times, a lower value for hard soil and higher value for soft soil; In addition, the upper layer should be thick to ensure the efficiency of the dredger; The last layer shall be relatively thin to ensure the quality of the project; When the mud surface above the water before dredging or the water depth is less than the draft of the dredger, the topmost excavation depth shall meet the requirements of the draft and minimum dredging depth of the dredger.

For example, the cross-sectional slope construction: when the channel dredging depth is larger, such as the thickness of the mud layer is more than 2 times the radial height of the ship’s mud bucket, it shall adopt the layered method for construction, the width control of each layer is calculated according to the design of the slope, and set up the guide mark of the layered excavation control of the width. Stratified control of the excavation width results in the instantaneous slope after dredging into a ladder shape. Under the action of water flow, the slope required for collapse formation can be calculated as follows:

H-Vertical distance (m) from the top of unexcavated part of the slope to the foot of slope;

When the dredger construction ship works, the design water depth is 2 m to 3 m. A fixed water gauge and temporary water gauge should be set up during the dredger construction period. A fixed water level gauge shall be set up within the scope of construction to keep abreast of the change of water regime at any time. The temporary water gauge is located in the place in front of the ship which is not easy to be knocked down and easy to read. When the water level changes little, the technicians in the ship will check the water gauge and read it sooner or later. The driver will adjust the depth of the cutter timely according to the change of water level. The depth of the deep design is reasonable and the ultra-deep is reasonable. The reasonable ultra-deep is mainly considering the back-sludge factor of the completed river channel. When the ultra-deep small acceptance is adopted, the river bottom may not meet the design requirements, and the ultra-deep is too large. The amount of excavation is not economical. Reasonable ultra-deep depth should be determined on-site according to the flow rate of the river and the soil quality.

In order to ensure that the plane control of dredging and excavation meets the design requirements, dredger construction control piles and directional piles shall be laid on the left and right bank of the section and shall be checked mutually. The distance between the construction control pile and the direction pile and the riverbed center of each section should be the same.

Section setting should be in the same position and pile number as the original design. The direction of the cross-section shall be arranged vertically along the excavation centerline of the river, and the curve of the river shall be arranged in a fan shape, with no less than 3 sections and no more than 50m spacing, and the distance between detection points shall be 2m ~ 5m. According to the coordinates of the excavation centerline provided, the absolute coordinates of the excavation boundary line can be calculated back. The coordinates of the control piles can be lofted out by GPS or total station (the visibility of river dredging construction is poor, and theodolite is generally not used for lofting).

There are three kinds of signs in channel lofting: longitudinal, transverse, and cross-section. The signs should be marked with marked and easily distinguishable posts, buoys, or lights, and can meet the requirements of night construction. Longitudinal signs located on the centerline of the trenching and the sideline of the design opening. Horizontal signs should be located at the starting and ending points of excavation, construction boundary lines, and curves. Horizontal signs are set up with five points: the centerline, the edge line of the upper and lower opening of the pecking shore. All kinds of signs are laid out in a unified way, the spacing is 50m-100m, and the bend is encrypted to 20m-30m. 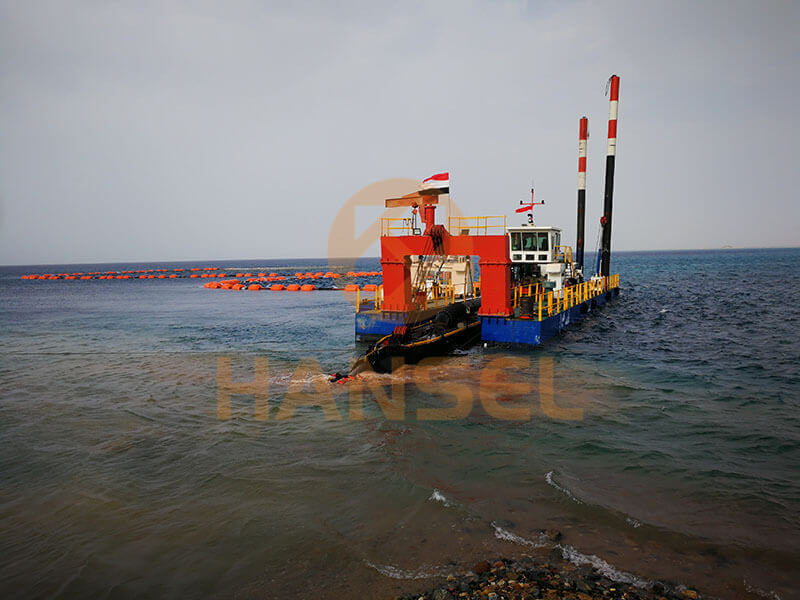